July 2 It  was a beautiful morning, bug-free and sunny. Overall it was wonderful walking for Alaska, mostly firm tundra and gravel bars. Wet feet from wading across river channels was a small price to pay. 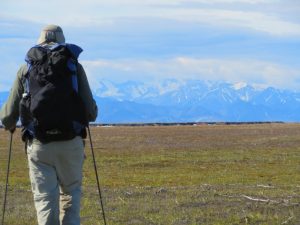 I saw scores of cow caribou antlers, scattered here and there, and not a single shed antler from a mature bull. Bulls lose their antlers in November and December, long before they reach this point in their migration. Cows usually lose their antlers in June, after they give birth to their calves. This year the Porcupine Herd is arriving here late.

For some reason Simon and Garfunkel’s “America” was stuck in my head, and I heard the lyrics over and over:
… we walked off to look for America
Cathy, I said as we boarded a Greyhound in Pittsburgh
Michigan seems like a dream to me now
It took me four days to hitchhike from Saginaw
I’ve gone to look for America

For a long way I walked atop aufeis, occasionally having to negotiate channels that flowing water had carved in the ice. The peaks of the Brooks Range loomed noticeably larger as the day passed. The ratio of adventure and fun vs. struggle was truly awesome today. 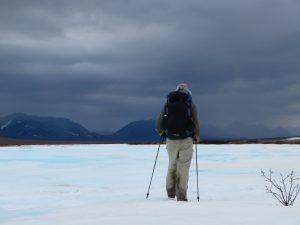 Luckily the winds were nearly calm because I had another campsite with no protection from the wind. What it did have was handy water, flat dry ground, and a wonderful view. 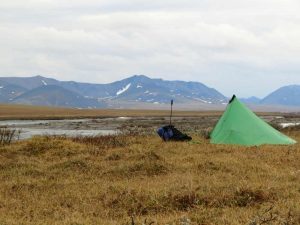 July 3 It was overcast today. Eventually it started raining, and the rain lasted for hours before becoming intermittent. I walked gravel bars to avoid a bluff. A couple of miles away a herd of caribou was hustling along. When they veered towards the river, heading my way, I hid in the willows and set up my camera and lightweight tripod. They walked out onto the aufeis and hesitated at the significant drop of three or four feet with the river bottom hidden beneath the glacial water. Eventually a brave cow jumped into the river with a splash with the rest of the herd following. They swam and waded across the river, and when they reached the other shore they shook themselves vigorously in a halo of water droplets. 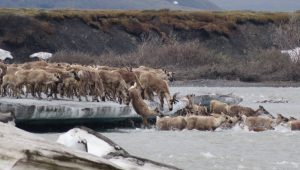 Caribou jump off aufeis into the river

Finally, several calves were left with a young cow, all walking back and forth along the lip of ice. They were understandably afraid of injuring themselves in the jump. A smart old cow noticed her calf was missing and went back to look for it. She stood below the ice encouraging her calf to jump but it was too scared. After a while the cow walked upstream a short distance and found a much easier crossing, the one they all should have used. The remaining calves and the last young cow followed the cow. They swam the river and rejoined the herd. 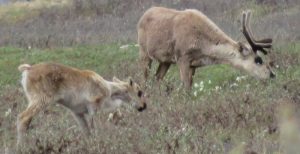 I continued north. A deep channel hit a steep bluff which I was forced to climb. For a couple of miles I stumbled through the infamous Alaskan tussocks, tough going, hard work and guaranteed to trip a hiker up eventually. Finally I got back down to the easier walking along the river. An animal moved in the willows. It was a lost caribou calf hustling along, looking for it’s mother. Hopefully she’d come back and find him/her, but I ached with empathy for such a helpless, frightened little creature.

I had already walked twenty miles for the day when I reached my food cache that I’d left in my Ursack, back at my original landing spot. It was only 1:45 but rain was looming and I was wet and tired. I set up camp and dug through my treasure trove of food. After eating heartily I got out of my wet clothes. I taped a couple of toes where blisters were trying to form.  I put on my dry sleeping socks and balaclava and crawled into my warm and dry sleeping bag and fell into a long and deep sleep.

Hi Buck! I just found you yesterday, and have been enjoying perusing all your adventures! Thank you for sharing with the world. It’s such a privilege to look over your shoulder!! Hope all is well with you! 🙂