August 12  I break camp and carry my kayak and gear downhill to the nearby river, thus completing the portage across the long, narrow river bend.  There is now a noticeable current, and a significant wind which works against me, or for me, depending on the river bend.  There are dozens of unwary blue-winged teal. 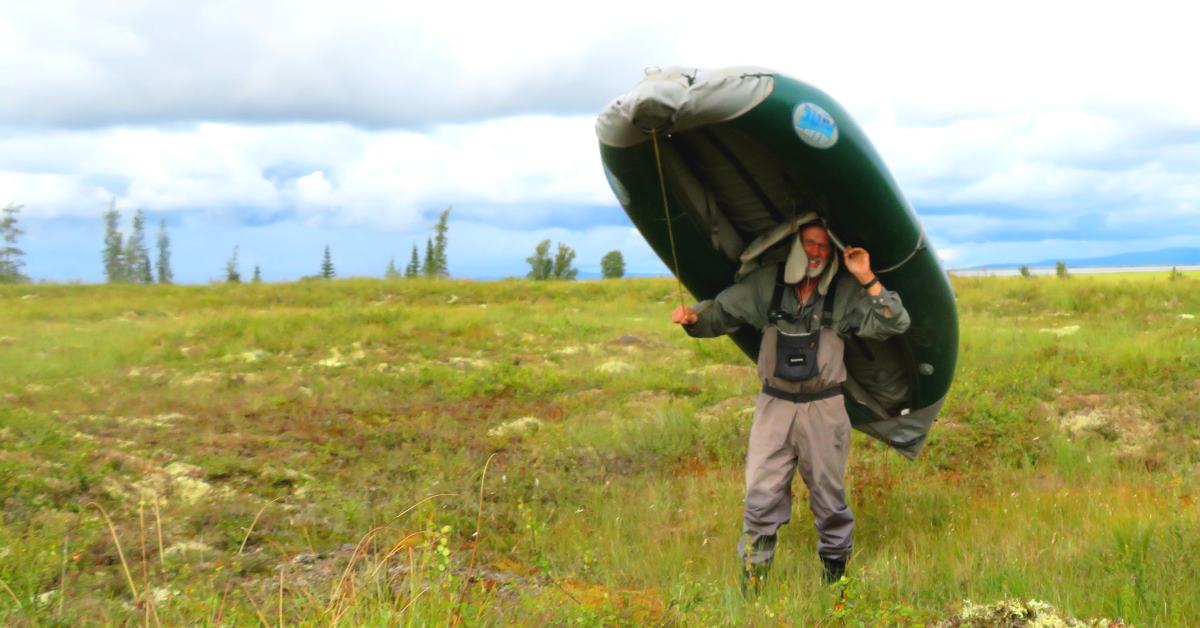 In early afternoon I watch for the start of the overland portage. I spot and follow a faint trail a short distance before spotting old steel cart tracks, like lightweight railroad tracks, mostly hidden in the grass and bushes. I am happy to have found the portage route, but disappointed in the condition of the tramway. The last report I’d read the tramway had been in good enough shape where they had used the tramway cart to make the portage. I expected at least a decent walkway, but find neither. It will still be a big help however. It will show me the route to the next lake.

I pick up my kayak and begin following alongside the half hidden tracks. Walking uphill, weaving around alder patches I decide to drop the boat. Change of plans. On an unknown route like this, take an easier load first and scout things out. I go back to the river and load up my big drybag.

I pass my boat and reach the top of the hill. There stands a rusty old steel winch, with a long, rusty steel cable. Years ago, it was used to winch the loaded tramway cart up the hill.   I leave the tracks for a a few hundred yards, following a moose trail through mostly open birch. I cut back to the tracks and walk between them,  across a fairly recent burn, partially grown up with low brush. I find another rusty winch at the top of a slope leading to a grassy lake. It’s late in the day and I have two more carries left. I’ll camp here in the birch.

My last carry is the kayak. I watch my step carefully as I walk through the tangle of bushes, following the track. I drop the kayak with a bounce and sit down for moment, sweating. I saw two cow moose during the portage, both apparently having lost their calves to predators. On the plus side, the fall colors are getting better, and I enjoyed some cranberries, blueberries and rose hips each time I walked back for another load. 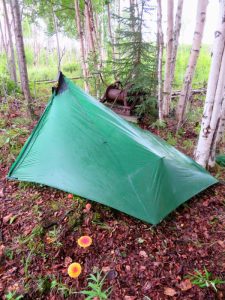 I set up my shelter next to the winch, with two bright orange mushrooms next to my door. I gather all of my food in a birch-leaf strewn opening, and sort out the food into days so I know I have enough, and so I know how much I can eat each day. I should have enough food to get to Bethel. It starts raining just as I crawl into my tent.

August 13 It blew hard last night so I’m glad it has calmed this morning. I slept well despite the wind. As I carry the first load down to the lake I find the remains of the old tram cart. I had suspected it had burned in the fire.

I carry my kayak out into a few inches of water, then make a couple of shuttles for the rest of the gear. I drag my boat out towards open water. It’s tougher going as the water gets deeper yet there is too much grass to paddle. Floundering half in and half out, I finally hop in and begin paddling. Yes!

I aim for the end of a treeline, from the map it looks like the old portage route. I search for a water passage through the grass, but there is none. I paddle as far as I can, hop out, and drag through the boggy swamp, through the narrows, and then then on through yet more grass until I reach  open water in the next lake.  That was hard work. 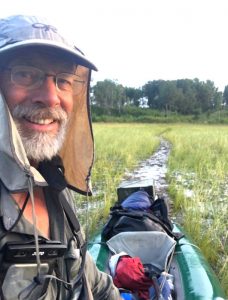 I paddle along the edge of this lake, looking for an outlet, but if there was ever a creek to follow, the water is now too low and the grass is too high. I verify where I am with my GPS, then pack up a load to scout the route.

The walking is spongy and uneven. Packing my heavy drybag is tiring work. It seems like it’s taking far too long to reach the next lake. I stop to check my GPS map… it shows that I’m way out in the lake right now! What is going on? I guess the water levels are down, or maybe the vegetation has grown in much thicker, or likely both. Finally I see open water. When I slog my way through the wet bog to the edge of the lake I’ve got another problem. There’s no dry ground to place my load, so I have to leave my drybag/pack. I jam my paddle into the bog so I can spot my cache from a distance in this sea of grass.

On my way back I spot a mysterious object and walk over to investigate. It’s the remains of a 60s era snow machine.  I hope there was a second machine with it when it broke down! I find higher ground to walk for two thirds of this mile-long portage.  There is excellent blueberry picking. Nearly every break I pick a bunch. 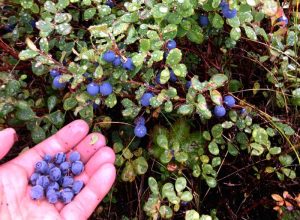 So this whole portage ended up being about six miles of total walking. Now however, I get to paddle three miles across Kulik Lake, a nice change. It’s amazing how shallow the water is though!

I’d hoped for a creek passage to the next big lake, that’s what it looks like on the map, but I’m not surprised to find more boggy grass at the end, resulting in another exhausting flounder, pulling the boat to shore.  It’s about a half mile to the next big lake, but when I scout the route this portage looks much easier. I pack everything uphill, across fairly firm ground, then down to another tiny lake. I paddle across it to a spit so narrow that I’m able to pull my boat over it into the next big lake. Yes! I am tired, but triumphant.

There are dark rain clouds about ten miles to the west. It doesn’t seem to be heading towards me.  It’s about two miles across this lake. If it were cold water, I’d wait for tomorrow, afraid a strong thunderstorm wind would hit today. But the water is warm enough so flipping the boat wouldn’t kill me.  A half mile out in the lake a quartering headwind hits me.  It’s exhausting fighting the wind and the waves, but I pick out a clump of spruce on the opposite shore as a target and just keep paddling. The Johnson River runs out of this lake. When I find it, the toughest part of this long portage will hopefully be done.

I reach the shore just upwind of where I expect to find the river. I plan to paddle down the river until I find a good camp site.  I paddle past where the river is plotted without seeing it. I land on the highest spot I can find and look around. The river should be here, but there is no river. I continue scouting the lake’s edge but the storm hits so I can barely make headway. I’m exhausted.

I beach the boat and carry everything to the highest ground around. Very little wind protection, but it will work.  I want to scout overland for the river this evening, but I’m whupped. I’m concerned that the river has rerouted in the last couple of decades, and if so, it might be difficult to find it. I study the map trying to figure out an alternate route through the lake systems, one where I could intersect the Johnson River, downstream a few miles.

I’ll do some scouting tomorrow and make a decision. I lay in my tent, listening to the wind and rain and thinking.

[Note, at the end of this day I’m camped on the south edge of the lake just SE of Kulik Lake.] 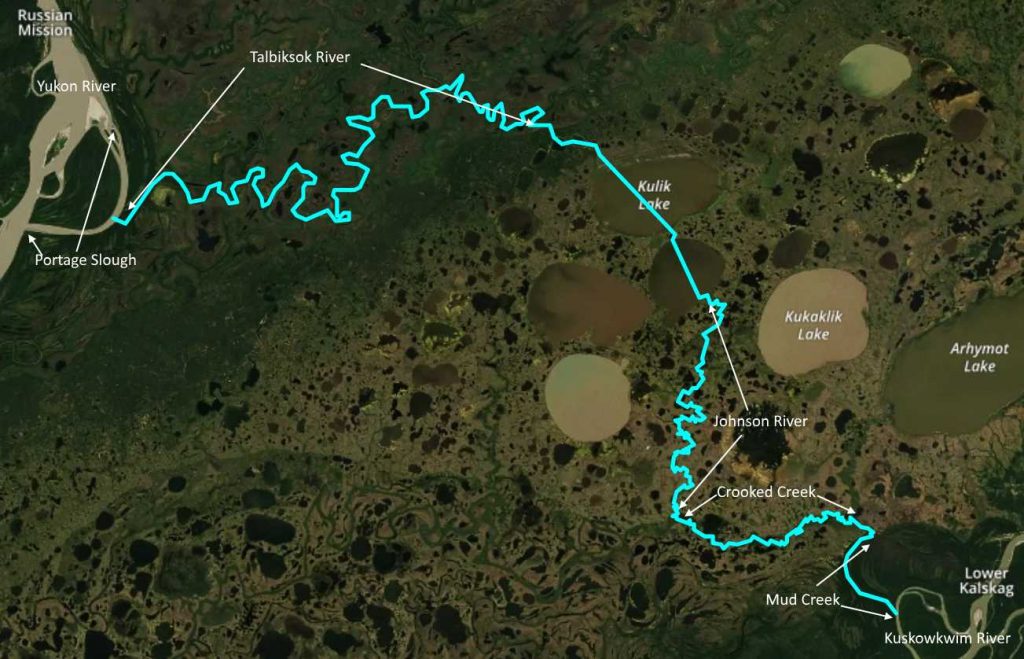 Check back for new posts!