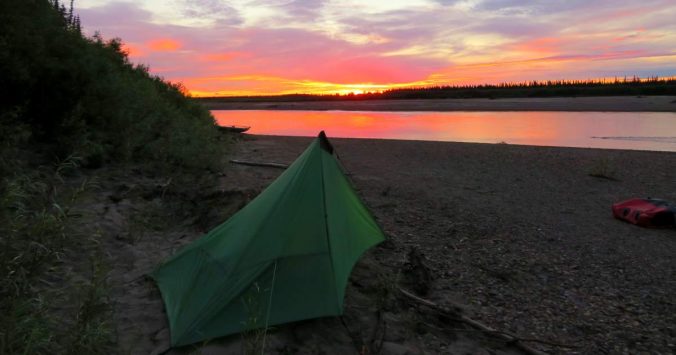 Down the Porcupine River

July 14 For three glorious hours this morning I’ve paddled downstream with a gentle tailwind. I paddle past beautiful cliffs,  most with clusters of cliff swallow nests. There are more Peregrine nests. Bald eagles watch the river slide by. 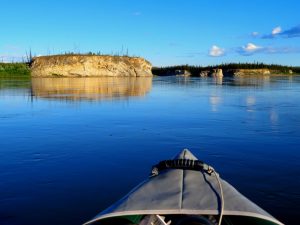 A half mile ahead a cluster of objects are scattered along a gravel bar. As I get closer I see several tents and canoes and a curl of campfire smoke. Someone walks across the gravel bar, the first person I’ve seen in over two weeks. I paddle quietly past in the middle of the river without being noticed.

After a few more miles I see the first buildings of the trip, some old cabins along the right bank. My GPS map says this is John Hebert’s village.

I pull my kayak up onto the shore and climb the bank to find a cluster of cabins. Some appear to have been abandoned long ago, some only recently. On one cabin is a paper plate upon which is written. “…Please help yourself to whatever you want here and in the new cabin.  Doors are open. Clean up before you leave.” This appears to be the end of John Herbert’s Village. 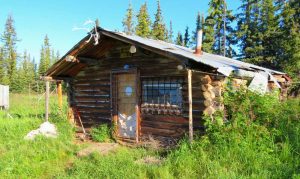 In a few more miles a jet boat is pulled up on a gravel bar with three people sitting by a smoking fire. One stands up and walks down to the shore.

“Are you the guy with the battery?” he asks.

“Our battery is dead. It’s not charging. We’ve got this generator but that’s not working either.” They are Athabascans from Fort Yukon. He says they are on their way to Old Crow, Yukon Territory. (The Canadian border is not far upstream.)  They’ve been here since yesterday. As we talk a powered canoe approaches and lands. He’s from the canoe camp I passed. He’s got a battery, but it’s too weak to start the boat. About five canoes pass as we chat. They are also from the canoe camp.

Since this is the main corridor in between Ft. Yukon and Old Crow, its seems like another boat should be along to assist the stranded jet boat. They don’t seem to be too well prepared for camping, but the weather is mild. The only thing that will kill them is boredom. I wish them luck and paddle on.

The powered canoe passes me. When I catch up with the group an hour later they are setting up camp on a big gravel bar. It does not look like fun camping out in the wind and in the sun where it will be baking inside a tent, the only refuge from mosquitoes. The main group is dressed in spiffy new REI gear. The canoes and  tents look pretty ragtag. The group doesn’t acknowledge me as I pass. They don’t appear to be having fun. I’m curious to know what kind of group they are.

The wind is coming up and the waves are building. I’ll camp early and launch very early tomorrow. Unlike the group I camp out of the wind and in the shade. I build a pleasant little campfire to cook supper. It’s nice to be independent, to make my own decisions, no compromises necessary.

July 15 I awake to an orange sunset and calm winds. By 1:30 AM I am paddling. Because “solar midnight” is actually about 2 PM, and the sun barely sets,  sunset flows directly into sunrise and it doesn’t get dark at all. The orange sunrise glows across half the sky.  After the sun comes up it is mostly sunny and warm, with only a passing rain shower. There are huge loops in the river so my forward progress towards my next resupply, Fort Yukon, is often slow, measured in “crow miles,” as I call direct forward progress.

A mother duck, a widgeon, has just reached the river’s edge as I come around a corner. A gaggle of tiny fuzzy ducklings is looking down the steep muddy bank, scared to follow her. She sees me and quacks frantically to her little ones. She knows they are very vulnerable, flightless and out of the water. One by one they attempt the descent and each one falls, tumbling down the bank, landing in the water with a plop, unharmed. They paddle away in a tiny flotilla.

It’s about 12:30 PM and the wind is coming up. I’ve already been paddling for 11 hours.  I set up camp in the shade of young cottonwoods. I saw three cabins total, but didn’t see a boat or person all day.  There are fewer people living in the bush than there were decades ago. 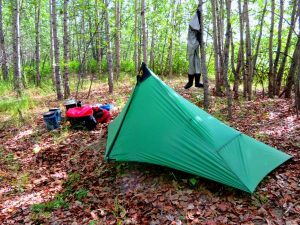 July 16 I start paddling down the quiet river at 1:15 AM. At 3:30 I stop to eat breakfast on a gravel bar, enjoying the rich, low sunlight of early morning. After I launch I notice a red fox trotting along a dirt bluff.  He doesn’t spot me at first and when he finally does he studies me for a bit, then sprints up the bluff and into the woods. 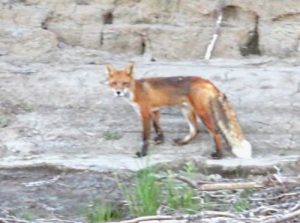 I want to camp at the mouth of the Sheenjek River, but a crazy headwind has arisen and I’m stopped less than a mile from my goal at only 10 AM. I select a campsite, trying to allow for the movement of the sun, but eventually a blazing sun hits my tent and I take the time to move it to a shadier spot. In the meantime I’ve got my solar panel set up to charge my camera batteries.  Inside my now shady tent I read a book about Kit Carson and lounge and listen to the wind and waves out on the river.

July 17 At 3 AM I wake up to find the wind has died down.  I paddle past the Sheenjek River and on down the Porcupine. I should reach Fort Yukon tomorrow.

I’m paddling peacefully down the river when I see a black bear sprint out of the willows and down to the river where he leaps into the water, swimming straight for me. His body language seems to be exactly that of an enthusiastic black lab who has spotted his owner and is swimming out to the boat for a ride. It seems clear that the bear thinks I’m perhaps a caribou or moose that he might catch, but that at any moment he will see I’m a person and swim away. But he’s getting closer and closer. Just as I pick up my paddle the bear realizes his mistake, and swims back to the shore. Just as he’s about to reach the gravel he sees that I’m not pursuing him, so he turns around and swims all the way back across the Porcupine River. That’s a long swim to do one and a half times! 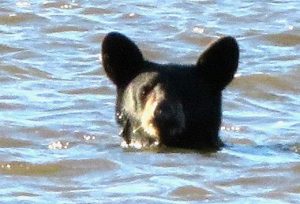 I pass a family of otters, the mother grunting to warn the frolicking pups.

When the wind hits hard, I find an awesome campsite in a mossy corridor in the willows. I set up my solar charger and cook lunch then read while lying on my overturned inflatable kayak, which serves as a nice giant air mattress. It’s such a pleasant spot, I’m slightly disappointed when the wind dies and I have to carry everything back to the river.

After making many more miles, rain is looming. Both the first and second potential camp spots I check are cabin sites, this being so close to Fort Yukon. Finally I carry my gear several hundred yards across a mud and gravel bar to camp in dry tundra among the spruce trees.  It will be strange to walk into the populated village of Fort Yukon tomorrow.

Absolutely wonderful writing! You cause everyone to actually see every thing on the pictured walls of our minds.

Was the book on Kit Carson “Blood and Thunder”? By any chance? What a great book!

And you are exactly right, the book was Blood and Thunder. A great book about a remarkable man.