July 22 Just after 3 AM I push off into the Yukon. It’s nearly calm.  For days I’ve been paddling across the aptly named “Yukon Flats,” but ahead I can glimpse the Hamlin Hills.

After a few hours I hear the distant sound of a jet boat. In a few minutes it passes with a roar, two hundred yards away, coming up from nearby Steven’s Village, likely.  Soon I see another boat. This is a busy stretch of river, so near the bridge.

I stop for a break and notice a long groove on a gravel bar. It’s a fairly common sight along many Alaska rivers. A log has been swept downstream when the water was higher, it’s root wad dragging in the wet gravel. 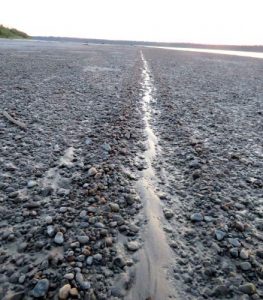 A nice cabin sits perched on a flat shelf, well above the river at the foot of a rocky hill. Impervious to the worst floods, far enough from the bridge for privacy yet close enough to for easy jet boat access, it’s a fine spot with a great view. My last year of smokejumping I jumped a fire near here. We pumped Yukon River water up the steep hills, the gritty glacial water slowly destroying the pump seals until they began leaking. A black bear had come through our empty camp, flattening out many of the tents, apparently just for the fun of it. The most memorable event happened as a group of us walked along the south bank right near here. One of the jumpers ahead of me stopped and kicked at something, then began to dig with his pulaski and hands. “Hey, check this out!” he yelled. We walked up. Holy smokes, he was uncovering a huge mammoth tusk! It was a remarkable find, long and heavy, the find of a lifetime.  What I wouldn’t give to see the animal that carried it. To this day that tusk hangs on the wall of the smokejumper loft in Fairbanks. 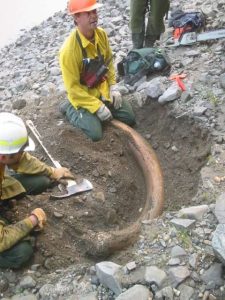 There are more cabins here and there, on high, flat spots along creeks or brooks. In gentle eddies lines of cork mark salmon nets, the end of each net marked by a larger buoy of some kind so boats don’t become entangled.

It’s a hot day. I stop on a shady gravel bar and build a campfire. I dip my little cooking pot full of cold Yukon water, bring it to a boil, them mix up a delicious, calorie dense lunch of flavored instant potatoes, freeze dried cheese, freeze dried meat, and ghee.

About two o’clock I catch the first view of the Yukon River bridge, the only bridge across the river in the entire state of Alaska.  A few cars cross the bridge. A handful of people are loading or unloading or loitering around boats at the landing.  There’s a little restaurant, and a gas pump. I’d planned to get a meal here, to get a shower. But how about my boat? All my gear? I could land upstream. Hide it. Bring my most valuable small stuff with me. But I just had a good meal. I’ve got plenty of food. I had a shower only four days ago! I paddle by in the middle of the river.  There are several dozen vehicles parked at the landing, most with boat trailers. 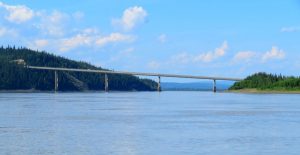 Downstream of the bridge several more jet boats pass. I round a bend and most of the activity is left behind me.

It’s now late in the day. I’ve come a long way and watch for a campsite.  Bluffs run right down to the river in most places though. In a few places are cabins. After miles of watching, and occasionally checking out unsatisfactory spots, I find a flat, shady spot with an awesome view of the river and the bluffs on the opposite shore.  I paddled 40 “crow miles” today, far more considering all the bends. I must have seen 20 boats today, more than the rest of the trip put together.