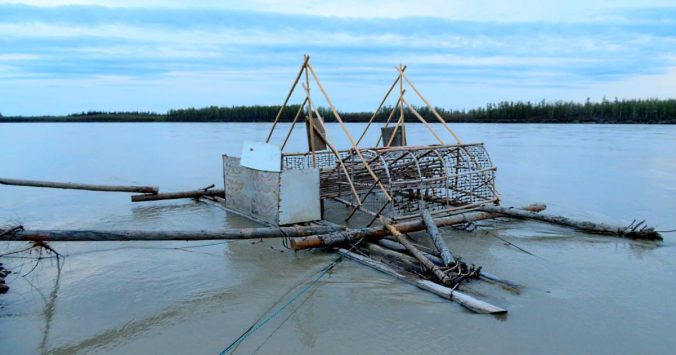 Fish wheel on the Yukon River

July 18 I started paddling at 3:30 AM, bound for Fort Yukon.  Before the trip I’d identified an ATV trail that looked like the easiest route from the river into the village. After  a few hours the GPS on my iPhone confirmed that a crude boat landing next to a steep bluff was the end of that trail.

I landed and hid my boat and most of my gear in the willows. I put all my dirty clothes and trash in my dry bag/pack and followed the trail towards town.  It was a good trail through birch, cottonwood and spruce. The trail turned into a gravel road which I followed to the Fort Yukon runway and back to 2004, when I had last been at the Alaska Fire Service station here as an Alaska Smokejumper.

As I neared I thought I could smell breakfast. I expected the station to be closed but the gate was ajar. When  I walked in I found the station was open due to local fire activity. I was greeted warmly by a firefighter who had been told I would be stopping. She pointed out my resupply boxes that they were holding for me. They graciously allowed me to take a shower and do my laundry and the cooks provided me with a good, hot breakfast.

When I looked around it was as if I had walked out of the station in 2004 and then walked back in a few weeks later with all new personnel working there. Even the photos on the walls were the same.

With my pack bulging with a huge food resupply, I hiked back to the river where I carefully repacked before launching back out onto the Porcupine River.

I was surprised to paddle for miles before the  glacial waters of the Yukon River appeared ahead. I climbed up onto an island so I could fully appreciate this significant milestone of my journey. 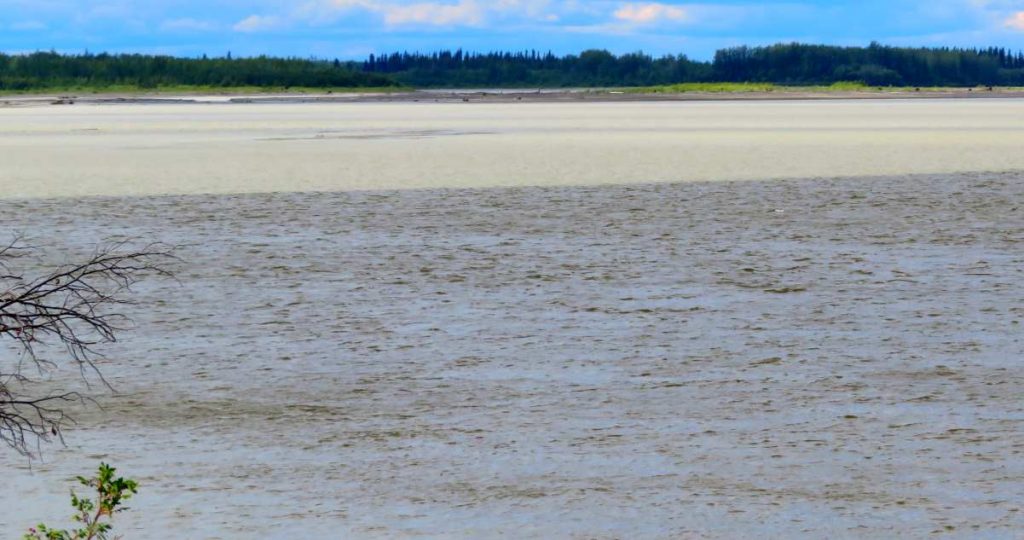 The combined rivers were now enormous. When a west wind came up I was working for my miles.  I found an island campsite mostly protected from the wind by low willows, and cooked my supper over a willow fire.

July 19 I started paddling at 1:20 AM to put in some miles before the afternoon winds hit. It was still only 5 AM when I stopped to check out a couple of fish wheels anchored along the shore. They weren’t turning. Season must be closed. I was most impressed by their construction. They were primarily made of small, limbed spruce trees nailed together. If I didn’t know they hold together I would be sure they would fall apart in short order. I mean nailed together, rather than using screws, flexing in the strong current like that, occasionally hitting floating debris?

When operational, fish wheels are turned by the current. Each huge paddle is also a scoop that sweeps fish out of the water, and they then slide down a ramp built inside the scoop, and into a waiting box. A truly ingenuous contraption which comes in many different designs.

Back on the water I  admired the scenery and looked for birds and animals. I also listened to several interesting podcasts, an enjoyable way to spend a few hours, to be in a different world. The wind started to come up and I paddled to the most protected side of the river when I could.  I explored a potential campsite, a nice flat spot under a giant white spruce, but was a bit of a carry up from the water so I elected to but in a few more miles.

My decision proved to be  a mistake, I’d come a bend too far. Waves started building so I worked my way towards shore. A huge, barren, windswept island blocked me. The paddling became so difficult, with spray whipping me in the face, that I was barely moving, so I got out of the boat and began pulling upstream in calf-deep water.  At the end of the island was a narrow channel and then timber on the main riverbank. I’d find someplace to camp there. I waded until the water got too deep, then jumped in my kayak and paddled furiously, slowly making headway. Finally under the protection of a steep dirt bluff I was out of the wind at last. It was a steep scramble up the bank but I found a flat spot amongst the alders and spruce just big enough for my tent. 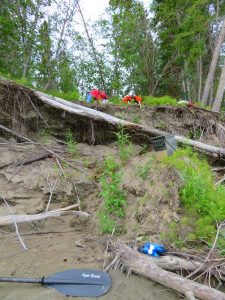 Camp on a bluff of the Yukon River

What a relief to get out of the howling wind, into dry clothes, and to enjoy the comfort of my little nest on the high bluff, looking through the screen door across the mighty Yukon River.

Bruce, I love your accounts and pics of your trip. Inspiring! You have seen so much. Thanks for sharing your adventures with us “muggles”. I look forward to the next chapter…

Congratulations Howie! You had a Big Year all the way around. Really enjoyed your Christmas letter once again. Keep on having fun!