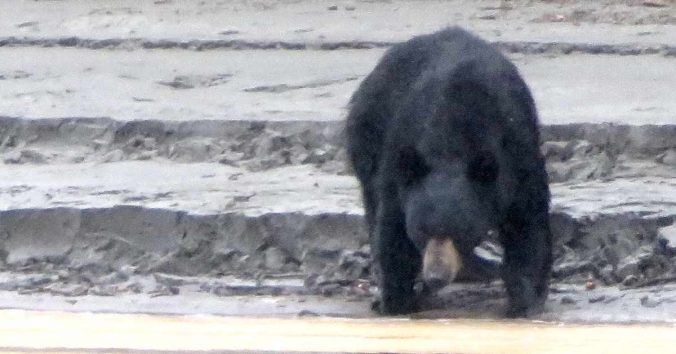 It’s August! It’s been a while since late June when I started this adventure at the Arctic Ocean. I spent all of yesterday afternoon in camp, pinned down by wind. Today I lounge in my tent with the wind moaning, the rain pattering overhead. I don’t really mind. It’s a pleasant break, nice and warm and dry, reading a book I picked up in Galena, a “whodunit” set in the back-country of Yellowstone National Park.

During a lull in the rain I cook dinner and then some polenta, which I’ll eat cold tomorrow for breakfast. Just before 1800 the wind slackens and the waves mellow. My paddling schedule is set more by the wind than the clock, so I quickly pack up and launch.

I’ve been paddling for less than 30 minutes when the wind hits hard again. I duck behind an island. Since I’ve already eaten dinner, and have already cooked tomorrow’s breakfast, I barely unpack, setting up my tent in the lee side of low willows, but with a good view down the Yukon. Only two miles of progress today!

At 10 AM I’m paddling past Kaltag, a row of jet-boats tied up along the waterfront, boats ready to check salmon nets or to visit friends and family up and down the Yukon. Kaltag has the look of so many Alaska villages, small, simple houses with metal roofs. All built, hopefully, far enough above the floodwaters or any giant slabs of ice pushed up by spring breakup. Not so very long ago I would have heard the barking and howling of hundreds of sled dogs; the dogs are gone, their roles almost completely replaced by snow machines.

I spot a black bear looking for food along the river, far more focused on a meal than me. As I watch he plucks a salmon from the water’s edge. He’s barely started eating when he turns around to grab another. Score! Both fish were likely king salmon recently dead, or nearly so, after spawning.

In the afternoon a handful of jet-boats pass a respectful distance away, with a friendly wave from the occupants. Most are going to or from fish camps or checking their nets.

For miles I think about a T-shaped cabin I might build someday, with a screened breezeway in between two small cabins, and 2nd floor gables to look out of.

I tally up my miles as I cook dinner and tomorrow’s breakfast. 43 crow miles today, a thousand miles for the trip!

I’m sitting in camp after a fine day of paddling, from 0630 to 1800. I did 40 crow miles, and I figure 50 river miles. I saw a couple of black bears foraging along the shore. I passed a fabulous, shiny metal fish-wheel. It must have been made by someone who does metal work professionally, because it was a work of art. What a contrast to the fish wheels I’ve seen nailed together out of peeled spruce!

Bald eagles and ravens are common along the river. It’s easy living for them during salmon season. 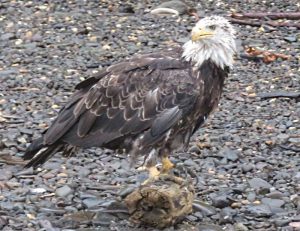 Across from the fish wheel I saw a couple of canoes and tents on a gravel bar, fellow adventurers no doubt. It was nearly 1100, they are getting a leisurely start. I still have only seen that one other pair of paddlers on the water this whole trip. Hard to believe.

I stopped for a shore lunch. A pack of wolves had trotted upriver. I studied their tracks and thought about what a formidable force a dozen hundred-pound predators are! 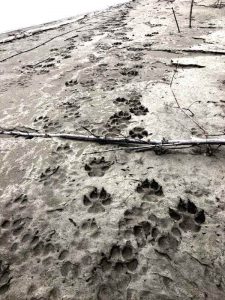 As usual, I propped my little cooking pot up on crossed pieces of firewood. Just before it boiled it toppled over. Fortunately I hadn’t added the food yet, and with the fire already going it was  just a few minutes to get another boil.

After  I set up camp the sun came out so I set up my solar chargers. My butt has been getting damp. This is the second set of Gore-Tex waders I’ve had where the seat seam eventually started leaking on long trips.  I’m prepared. I GOOP the seam and hang the repaired waders in the sun. It was a good day.