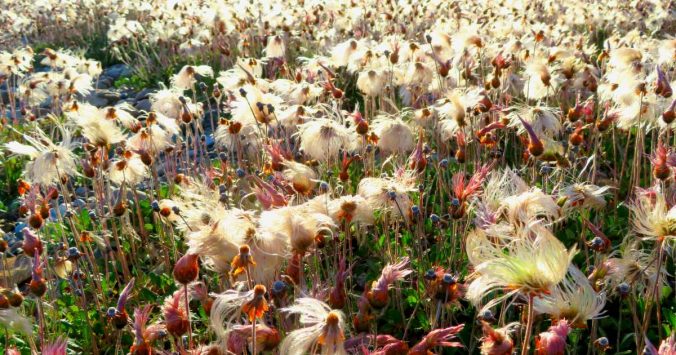 Confluence of the Porcupine River

July 13  It’s a glorious summer morning, the prettiest of the trip, sunny and warm. The river miles come easy as I paddle steadily, with the current helping me along.

Something is splashing along the shore. As I near I see otters, chirping and playing.  I float quietly towards them. The mother suddenly notices me and swims towards me aggressively, growling. Another animal mother protecting her young. The young otters show no concern at all while the mother keeps a close eye on me as I drift past.

There are more scenic river bluffs today, with more peregrine nests. Bald eagles wheel overhead or watch the river from lookout trees along the shore. I stop for a break at a hairpin river bend opposite a rocky bluff.  On the inside bend are spruce and cottonwood on nice high ground. What a beautiful place to build a cabin! Good fishing, no sign of it flooding, solid ground not subject to erosion.  Far enough below the prior bend so spring breakup ice is unlikely to be a problem. I can’t find the old trapper’s cabin that must have been here long ago.

I open the ammo box and extend my telescopic rod, tying on a casting bubble for a little extra weight, and at the end of the line a spinner.  The spinner splashes into the deep, shaded water near the far bank. There’s a swirl and the tug of a fighting fish. Yes! I reel in a  long-finned grayling and quickly release him without lifting him out of the cool water. Soon there’s another strike and as it nears shore I see it trailing blood, somehow the hook has torn it’s gills. I grab a nearby stick and whack it on the head, an instant death. I take a photo of it in the shallow water. It’s a female with a much smaller dorsal fin than a male grayling, but still beautifully mottled with turquoise and red.

I build a hot fire on the gravel bar. As it burns down to coals I gut and rinse the grayling, then bury it in coals. In a few short minutes I use a stick to push it out onto the clean gravel. It’s meat flakes perfectly. Done! The charred skin peels away, leaving the steaming white meat. Delicious! After eating I burn the skin and skeleton and the remains of the cooking fire down to a fine white ash, which will wash away in the next high water.

Back on the water a cool shadow sweeps across the land and the sky rumbles. Afternoon thunderstorms are moving in. I take out my rain jacket to have handy.

Some big animal is moving in the shade of tall willows on a gravel bar downstream. A bull moose, his massive antlers still growing fast, brown and fuzzy. He’s an old timer and knows people mean trouble. Before I can deploy my camera he plunges into the brush and is gone.

Ahead is a broad expanse of darker water. The Porcupine River! The confluence is not at all what I’d imagined. The black soil of the tall, right hand bluff of the Coleen is rapidly eroding into the water. The scent of ancient plants fills the air. Water gurgles around trees that have fallen into the river. I paddle out onto the middle of the Porcupine. 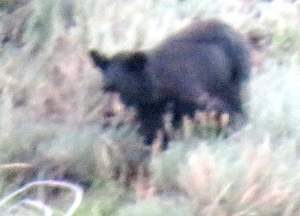 The Porcupine, is a much bigger river, and here at least it is straighter and siltier than the clear waters of the Coleen. In many places there are dramatic bluffs, and for the first time on this trip I spot sagebrush. As I admire a sage covered bluff I see a black bear patrolling through the brush. I snap a distant photo of, for Alaska, an unusual combination of flora and fauna.

Sage still strikes me as an exotic plant in Alaska, although it grows on bluffs in isolated places. I stop and crush some sage leaves. Their familiar scent transports me to places far from the Porcupine River.

Many of the bluffs have clusters of cliff swallow nests under protected overhangs. Quite a test for young swallows on their first flight! Succeed or plunge into cold water.

Normally I don’t travel far from the water to camp, but it would be fun to camp on a high spot overlooking the river. I stop at one bluff and try walking up a little drainage but it’s a horrible tangle of brush with sucking mud beneath it. Back near shore a pike, which I thought was a big stick, explodes out of the shallows, making me jump! 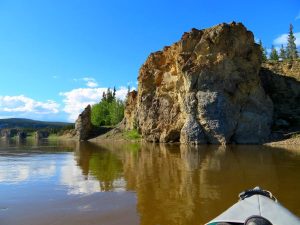 After many miles I see a rugged route leading up to what appears to be a flat spot high above the water. I take a light load and make the climb. It’s a beautiful site. I tie off the boat and make one last carry to the top. I set up my tent and eat dinner, then sit looking out across the Porcupine. I haven’t talked to or even seen another person in two weeks. 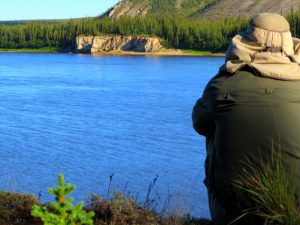 Camp above the Porcupine River

Another fantastic installment in your list of reports! Can’t wait for the next one!

I appreciate that Paul, thank you.