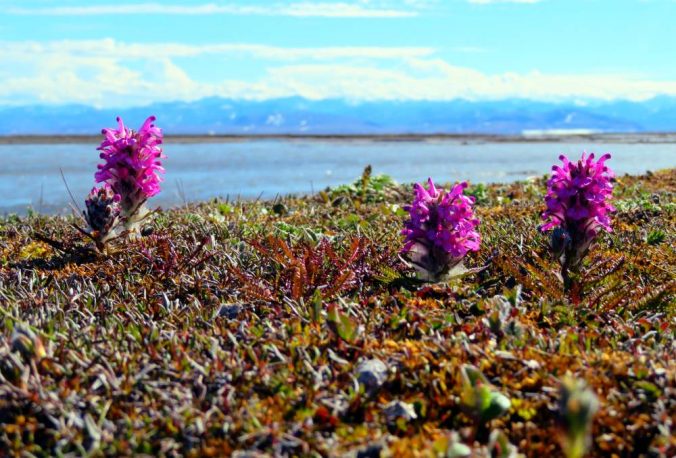 June 30 I slept soundly. It was cold and foggy and dew covered the tundra. I put on my wet stuff, pants and shoes and socks, packed up and hiked downstream, north, up the Aichilik River. The aufeis looked cold and intimidating. When open water pushed me over to a high tundra bluff, I hiked along it until I heard water dripping. I shuddered when I took a step to the left and looked down twenty feet into a crevasse where the permafrost of the bluff had broken away. Cold water of the river swirled at the bottom. 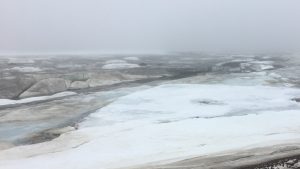 Aufeis on the Aichilik River

It was spongy, tiring walking on the bluff, but the fog had burned off and the views were great. Here and there caribou grazed, and then I saw something that I thought might be a grizzly. I sat down and pulled out my little monocular. Sure enough it was a lone bear digging for roots and wandering the tundra. Just then I heard a thumping sound and looked up from my monocular. A wolverine loped over the bluff, 25 feet away. Our eyes met. I was sitting down so he was as tall as I was and he didn’t quite know what I was. There was a long moment where we each gauged what the other might do. I slowly felt for my camera in one pocket, then another, as his long hair rippled in the breeze.  He began loping away, then running, glancing back over his shoulder. He fell back into a mile-eating wolverine lope, farther and farther into the distance. 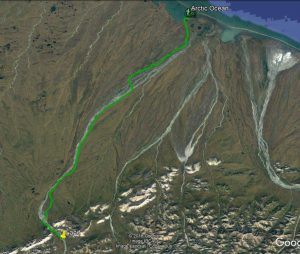 From the bluff I could see I could see that the high bluff on my side of the river continued for several miles to the north. The other side looked flatter and like much easier walking. After another couple of miles the river braided out into multiple channels. I waded across channel after channel, and walked up and down islands looking for the shallowest crossing points. It was a significant river now, but I made it without difficulty. This west side was easier walking, mostly gravel bars or fairly firm tundra and there was little ice. There were many small bands of caribou. About 7:30 I’d come twenty miles. That is a big day for Alaska hiking. When I saw a nice, flat, dry piece of tundra I stopped to set up my tent and eat dinner. I was only ten miles from the coast!

Today, except for what I carried with me, I didn’t see any sign that humans have ever existed. No roads, no planes, no houses, no trash, not even any contrails. True wilderness. I tried not to think about the plans to drill for oil here in the 1002 Area.

I walked north along the river, alternating between mostly firm tundra and gravel bars, seeing more caribou, and swans, enjoying the easy walking and being away from the ice. It was a fine, sunny day. About four miles from the coast I decided to beeline straight north to avoid a lake. It wasn’t long before I found I may have made a mistake. This was more typical Alaska walking, spongy and wet. It was exhausting. I sat down, leaning against a tussock to rest. A Lapland Longspur landed on a nearby tussock and studied me curiously. 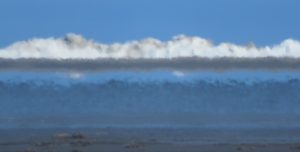 Pack Ice on the Arctic Ocean

Ahead was a band of white. Pack ice! Miles in the distance. The ocean! After a long slog I reached the shore. It was littered with driftwood including many small logs. They seemed out of place so far out in the treeless tundra. Were the ancient Inuit familiar with trees? Did they know where the wood came from? I walked east along the shore towards the river’s mouth until I came upon the remains of Inuit sod huts, a dozen or more. They had used driftwood for structural timbers. This had likely been an inhabited site for thousands of years. The pack ice shimmered a few miles away. 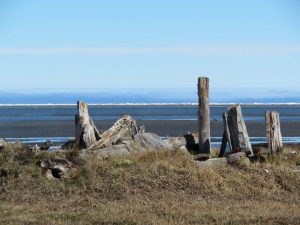 I walked around and thought about the people who had lived here, what it must have been like here in the winter wind in the months-long winter night. An old seal skull lay in the tundra. Polar explorers noted how happy the Inuit seemed despite their apparent hardships. I am happy to be here on a warming, sunny day. I ponder camping here tonight but it seems somehow disrespectful.

It’s time to begin my southbound hike. This time after I pass the lake I take a shortcut to the river. The walking is not only easier, it’s maybe half the distance to the much easier walking along the river. What a different world it is now compared to yesterday when I was walking the aufeis with cold wet feet on a rainy, dreary, cloudy afternoon. Today is sunny and warm without a mosquito in sight! At the end of a twenty mile day I find a  patch of dry, flat tundra to set up camp. 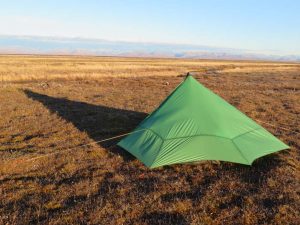 I got up at midnight to pee and was delighted to see how high the sun was. I took a photo of my Lunar Solo tent in the rich light.

Warren and I were just wondering what you might have done this summer… wow, looks like another great trip. Have just started reading your journal and look forward to seeing what happens next! Sounds like a light pack so far! Diane
(… We met you on the Missouri in 2016- 2 big yellow kayaks.)

Hi Diane,
Great to hear from you! Sorry for the long delay. There was a glitch in the comments notification.
That Alaska trip turned out well. What kind of adventures have you been up to since I saw you on the Missouri?
Say hi to Warren!
Buck