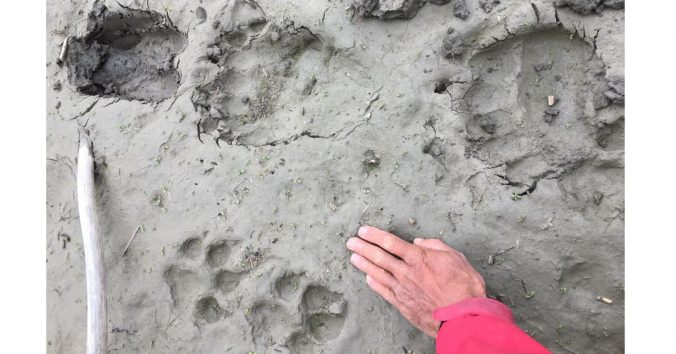 Tonight I’m camping on a willow island a few miles below the village of Russian Mission.

On the 7th I had a good day. It was cloudy with periodic rain showers with 45 minutes of beautiful sun and a nice rainbow arching over a bluff. The winds were mostly light or calm. I saw a black bear sow with two cubs foraging along the Yukon, and some salmon “porpoising” in the river. I managed to get my camp all set up just before it starting raining again, always a triumph. I paddled 43 “crow miles.” It was nice to put in some big miles again.

The 8th was probably my toughest paddling day of the whole trip, measured by effort per mile. There was hours of strong wind, not enough so big waves shut me down, but some windy bends were a real battle. It rained off and on. The sun peaked out enough that I got to enjoy numerous rainbows. I saw a lone cow moose, and spotted a black bear hunting along a rocky bluff. Sometimes he’d climb up high to make his way along the bluff, at others he’d swim around cliffs to the next gravel bar.

I stopped to eat lunch along the shore at the old village of Paimiut. It looks like it might be abandoned except for use as summer fish camps. There were moose and bear tracks and plenty of dry firewood, and a safe place to build a fire on the gravelly riverbank. The grizzly tracks look bigger now, more salmon on the lower rivers mean more food and bigger bears. These salmon-eating grizzlies are commonly known as brown bears, while inland bears of the same species are called grizzlies.

Paimiut was sometimes considered the boundary between the Yupik and Athabaskan peoples in the old days. I’ll be passing Yupik villages for the rest of this adventure. I set up camp early, worn out from my battle with the wind. I still managed to eke out 24 crow miles. It was nice to read in the evening, listening to the rain on my drum-tight tent fly.

Today, the 9th, it was windy and cool enough that I wore my rain jacket all day, even when it wasn’t raining. There were often nice mountains to look at, mountains I saw many times from the air on smokejumper flights.  Bald eagles were plentiful. I was kept guessing today on which shore to hug to minimize wind influence. On one long, windy stretch where I had to keep paddling hard to maintain forward progress, I nearly decided to call it a day. Near Russian Mission the terrain gave me some respite. There were numerous boats out tending nets. Many families watched me curiously, but nobody swung over to chat. 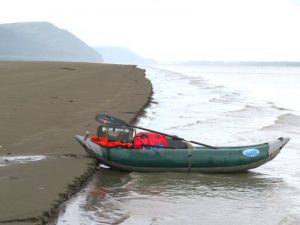 I carefully watched my map and turned off the main Yukon at Portage Slough. I was tired but couldn’t find a good campsite for miles. I prefer camping on islands where there are less bears, but the banks were too steep. Finally I found a decent landing spot and found a nice camp.

I cooked supper and tomorrow’s breakfast in an opening in a willow thicket, completely protected from the wind, and ignored by insects. 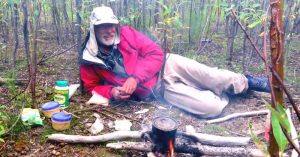 Tomorrow I’ll begin the 80 mile portage to the Kuskokwim River. [see the yellow section of the map on my trip overview page.] This portage is the big unknown. As far as I know it hasn’t been done for years. I don’t know what kind of shape it’s in, or what to expect. It will be a proper adventure.

And why does that camp look familiar?

That was just my campfire spot, Tony. You would have loved my tent spot, nice and open and flat and near the water.