July 21 It’s just past midnight, although it’s not dark of course. The wind was howling last evening after I went to bed. There is a dusting of fine sand inside my tent. It grits in my teeth and in the tent zipper and appears in every little nook and cranny of my sleeping bag and everything else. Outside I find little drifts of sand partially burying my gear. I shudder to think what it would have been like if willows hadn’t protected my camp from the full brunt of the wind.

Now the Yukon River slides past peacefully in a beautiful calm. I shake the sand off everything, pack up and launch out onto the water, ravens croaking in the distance.

There is no wind to fight, no waves to battle. The rhythm of my paddling in the steady current propels me downstream at five miles an hour, often faster. I turn my kayak around to admire the orange sunrise. 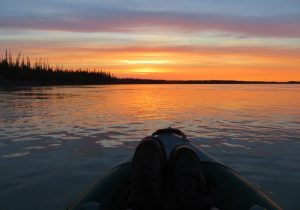 Mid-morning I stop to explore an old cabin atop a steep bluff. It’s a tougher scramble than expected, and thicker walking once I get on top. Like most remote cabins there is a certain amount of debris scattered about: chain saw parts, an old wheelbarrow, a snow-machine ski. There is a sign on a tree asking people to please not strip the birch trees of their bark. I recognize the family name, well known up and down the river. This cabin, like countless others along the Yukon, will probably end up a victim of the slowly eroding silt bluff it sits upon. If I built a cabin along the river, I’d make it small and put it on skids so I could use come-alongs to pull it back away from the river as needed. At least that’s what I tell myself. Of course, most of these cabins will last a lifetime, and wilderness people are often fatalistic, even when it comes to things like river ice or life jackets.

Downriver I paddle past an old burn. I stop to look for blueberries but I don’t even find any blueberry bushes, let alone berries. Later a clear creek runs into the silty water of the Yukon. This spot screams “pike.” I land the boat and deploy my telescopic spinning rod, tying on a big spoon. I am so confident of catching a nice pike that I set up my camera and tripod. The spoon hits the water with a splash and almost immediately there’s a big swirl and I feel a strike, but it gets loose. When I cast again there is a solid strike and my reel screams as the big fish charges away, but again the line suddenly goes slack.

A few steps upstream I cast again. There is a slashing strike. The reel sings and my rod bows dangerously. Yahooooo! I try to keep him away from the weeds and snags, gaining line when I can, losing line when he makes a strong run. As he tires I see him, a big, mottled pike. When I reach down to unhook him I see a plume of blood. Although I’m using a single, barbless hook, somehow he’s injured himself. He’s bigger that I can eat for one meal, but he’ll be an all-I-can-eat feast today. I grab a stout stick and whack him on the head, then pose for a photo. Miraculously, my camera setup hasn’t jinxed the fishing.

I gather plentiful dry driftwood, building a fire on the firm mud of the riverbank. While it burns down to coals, I retrieve a sharp knife and filet my catch, wrapping the meat in two packages of aluminum foil, then lay the foil packages onto the coals, stacking another layer of coals on top. In moments I hear the meat sizzling. A few minutes later I use a stick to push one package out. The meat flakes perfectly.

Out of my food supplies I take package of ramen seasoning and sprinkle it on the steaming meat. It’s delicious. What a feast! I wash it down with cold water. What a treat.

I put the remaining meat on the floor of the boat, in the shade, near the cold water of the river. Definitely a necessity, it’s a beautiful, sunny day, the hottest of the whole trip.

The river does a big loop. The map shows a channel shortcut through some islands. Unlike many shortcuts, it works well, saving me a mile or more. As I near the end of one island I lynx pokes it’s head around the corner, immediately ducking away before I can get a good look.

I paddle for miles looking for a good campsite, which turns out to be a nice spot shaded by willows. It’s 8 PM, nearly 20 hours since I got up. Not another person in the world. It’s been a fine day. 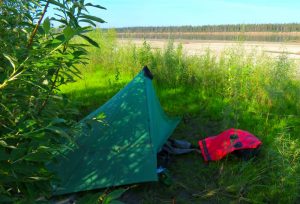