July 25-28 I have a high tolerance for insects. It’s a good thing because they are thick at times now. The first bad night clouds of black flies/gnats/whitesox were trying to get into my shelter.  Several wasps showed up to feed on them, and were slamming into the netting as they caught one after another, gathering up three at a time before flying away. It was such a racket that I had to go out and fetch my earplugs.  When I crawled back inside, as quickly as possible, there must have been two HUNDRED black flies that sneaked in with me. Luckily they tended to fly up to the peak of my tent, where I patiently squashed them. In a few minutes they were all dead and, all ear-plugged up, I fell asleep in bug-free silence.

Kokrine Hills from the Yukon River

Just below the confluence of theTanana River, a mighty river in its own right, I reached the village of Tanana. It was the morning of the 25th. A dog team was tied up along the river. It was already hot and buggy and they had no shade.  I hope they have fun running in the winter because their summer looked like no fun at all. I’d planned to stop for breakfast, but it didn’t look like anything was open yet, so I paddled on by.  Numerous jet boats were tied up along the shore and one launched just as I passed, the operator ignoring me. 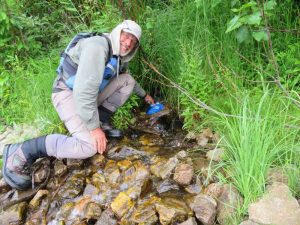 About an hour later I spotted a mysterious object in the river. I slowly gained on it. It was a small log with the root wad sticking up several feet. I was amazed that we leap-frogged each other for nearly 25 miles. It’s roots pulled it along in the current as I paddled against a headwind.  Finally I passed it, but after my shore lunch was amused to see it had passed me and I once more had to paddle for a long time to pass it.

Each day I’ve been starting to paddle very early, quitting when the wind comes up, putting in at least 25 crow miles. Considerably more river miles. Near Tanana I saw several jet boats, but some days I didn’t see another human being. When it was near mealtime and I approached a nice hillside brook, I liked to stop to cook a meal on a wood fire while I filtered drinking water. 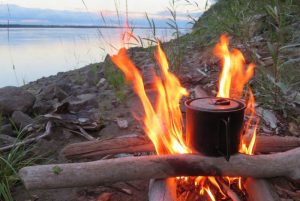 7 AM breakfast after a seven hour paddle

This morning, the 28th, I started paddling just before midnight. It was perhaps the calmest day of the trip and the world slid by. There was a bright full moon and for the first time on the trip it was dark enough that I could see a star, or rather Venus, I think. It soon disappeared as sunset flowed into sunrise.  A few lights twinkled at the little, sleeping village of Ruby. A dog barked far away, hidden in the dark spruce. 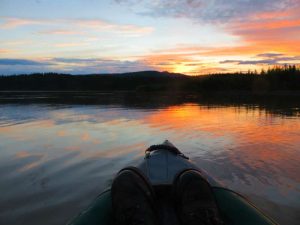 About noon I started looking for a good campsite. I found a good spot above the river but found a burned cabin there. I didn’t feel right about camping there.  I must have paddled nearly ten more miles before I found an island with a good landing spot with flat camping nearby. This island has many moose tracks on it, almost all of them do, and bear tracks are surprisingly common on the islands as well.

My GPS says I’ve come 52 crow miles. My biggest day yet! Tomorrow I’ll make it to Galena where my next resupply box is waiting. I set up my tent in the shade of some willows, then sort through all of my food and equipment, separating out all of my trash, and reorganizing and laying everything out to dry in the hot sun. I set up my solar charger and read my book about Kit Carson.

Check back in a few days for another post!

Is that book about Kit Carson entitled,”Blood and Thunder”?

Indeed it is, Troop! A great book and an amazing character in American history.