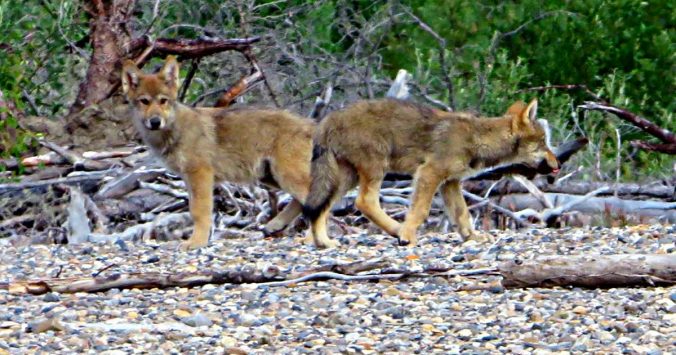 July 12 There’s a clear blue sky this morning. I’m paddling SSW into a light headwind. Some of the time, anyhow, there are countless hairpin turns. 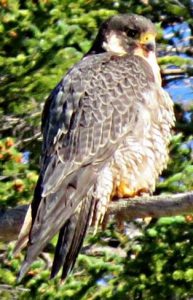 A tall rock bluff looms above the river, from which I hear the “kak, kak, kak” alarm call of a nesting peregrine falcon. It’s mate flies in on rapid wingbeats to investigate. A few bends later is another bluff and another nesting pair. Once an endangered species, Peregrines have made a huge comeback. 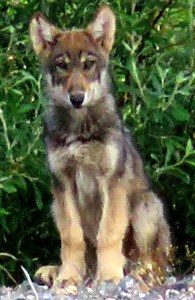 In mid-morning I pull over to gravel bar to grab a snack. When I stand up I look over a gravel bank and see… wolf puppies! Three of them, basking nearby in the warm sun of the gravel bar. Awesome!!! They can just see my head so they’re not sure what I am. They stand up and look at me suspiciously, glancing at one another to see what the others think. Two of them trot away. The other sits down and watches them go. I duck back down and grab my camera. When I look up the lone puppy is sitting, watching curiously, still unable to see enough of me to know what I am. His siblings have trotted off though. Losing nerve, he trots off a way before sitting down again. His siblings nervously look back and forth from him to me. Their body language is saying, “Run dude! It might be dangerous!” From downriver, I can hear the howl of adult wolves, undoubtedly part of their pack. The pups trot off into the willows. That was really fun. 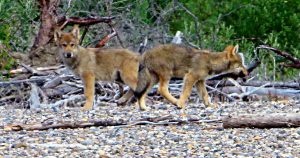 Around the very next bend, two moose stand knee deep in the river, a very large cow and her calf from the prior year, a bull, his antlers still in velvet. The cow steps protectively between him and me. A threatening rumble comes from her chest. Instead of them running for the willows as I’d expect, they stand defiantly. I suddenly realize the probable cause. The wolf pack has been chasing them. They have run to the river, ready to plunge out into the deep water. The wolves have likely killed her calf from this year, maybe today, maybe weeks ago. It’s hard to fathom the level of stress they must be experiencing. They stand their ground and I drift by. I turn to look a back as I round the next bend and see them still standing there.

At lunch I build a little fire on a gravel bar to boil some water for lunch. There’s a loud pop and embers scatter. It seems strange because I’m burning willow wood. Thirty seconds later there’s violent crack and the coals get scattered in all directions. I smell something burning and jump up to see what’s on fire. A small coal is stuck to my waders. I brush it away but it’s burned a tiny hole. Then I see rock flakes and see the cause of the small explosion. There was a larger rock just beneath a thin layer of gravel. It was wet and steam pressure built up and a slab of stone blew off, scattering my fire. Yikes.

Later a side stream flows into the Coleen. I land and pull out my telescopic rod, hoping to catch a grayling. Wading in the shallow water I’m startled by a pike erupting out of the shallows towards deep water. Once again the fish aren’t biting, and if I’m not mistaken my waders are leaking. Upon inspection I find a wet pants leg. My duct tape ember repair was sloppy. This will be an easy repair if I take the time to do it right. 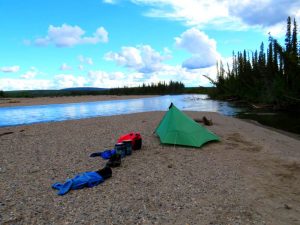 This evening a storm is looming to the north. To the south, the sky is still mostly blue. I set up on a gravel bar, well above the water. I cook dinner on a campfire, the Coleen River sliding past. I fall asleep to the peaceful gurgle of the water. 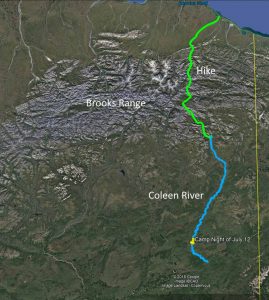 Great post, loved the contrast of seeing the pups and then coming across a cow moose that must have lost her calf to wolves, probably that pack.